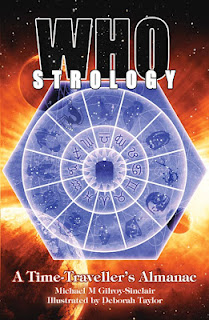 Whostrology: Time Travellers Almanac is the hilarious astrological guide book based on every one of the 750 plus broadcast episodes of BBC Televisions Doctor Who.

Whostrology: an astrological system based upon the travels of a certain Time Lord. The mythic qualities of his tales of adventure form the basis for this book of daily readings that can help you shape your life and live in a truly Whovian way.

It has been said that the Doctor was born under the sign of the crossed computers. This could mean one of two things. It could be nothing more than a flippant remark to a passing local; or it could be a reference to the stars as seen from the Doctor’s home world. As any visible constellations are an arbitrary set of images fully dependant on the observer’s location in time and space as well as their cultural heritage, it can also be argued that some people have nothing better to do than make things up.

Whostrology is a book of daily readings, zodiac signs and explanations, and other Who-based astrological elements, designed to allow every Who fan to lead a life of peace and ordered calm.

it's a worthy tome, presenting a day-by-day selection of astrological readings, plus zodiac information ... everything you need ... really.

Note this tongue in cheek guidebook can be used in ANY year and is NOT specific to 2013/ The 50th Anniversary!


Michael M Gilroy-Sinclair is the host of the reasonably popular and award winning Doctor Who: Tin Dog Podcast, when he is not working on his next book. He is also a founding member of the Doctor Who Podcast Alliance

Deborah Taylor has been a Doctor Who fan since she was five and has contributed illustrations for fanzines such as The Terrible Zodin and The Eleventh Hour. She would really like to spend more time drawing and eating crisps.

TO ORDER YOUR COPY CLICK ON ONE THE LINKS BELOW. 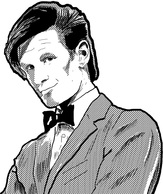 A SAMPLE PAGE FROM THE BOOK


Some gifts are truly rubbish, your brother may look very pale and act oddly – be afraid. It is a good time to prepare for embarkation; A red head surprisingly enters your life and acts like she has known you for an age. There is nothing you can do about this. The writing is on the wall at an ancient poison factory so shatter your chains and come into the water.

* people ordering from amazon.co.uk may get an 'out of stock' sign but it seems to e posted out straight away. I have contacted them but they have yet to reply. American readers are recommended to order directly from the publisher to avoid disappointment

** The book is definitely not out of print - regardless of what Amazon.com have on their site

BUY FROM DIRECT FROM THE PUBLISHER
BUY A SIGNED AND PERSONALISED COPY
BUY AT AMAZON.CO.UK - in stock *
BUY AT AMAZON.COM **
CONTACT THE AUTHOR
FREE DAILY WHOSTROLOGY READING